Travelling to Central Asia? Make sure to add these to your Turkmenistan travel list.

At once Immediately recognizable as Central Asian and yet worlds apart from its neighbouring ‘Stans, Turkmenistan is like no other country on the planet. It’s been described as ‘more North Korea than North Korea’, boasts the world’s hardest-to-get visa, and is full of fascinating and bizarre sights. From the gold-and-marble kitsch of Ashgabat to the ghost resort of Avaza. Turkmenistan travel has a lot to offer.

We count down the 8 best things to do in Turkmenistan.

Something wholly unique to Turkmenistan, Dinosaur Plateau is a huge limestone slab perched on the side of the otherwise-verdant Kugitan mountain range. 40 discrete kinds of dinosaurs’ footprints have been found on the plateau. You’d be hard pushed to spot them all but you can certainly give it a try!

After visiting this spectacular canyon, you may find yourself downgrading the Grand Canyon to the “OK I guess” Canyon. This colourful ravine – which was once a seabed – is about 5.5 million years old.

Nothing much remains of this Parthian Empire stronghold, but it’s well worth seeing what’s left. Once containing 43 towers and with beautiful architecture influenced by the Romans, Old Nisa is a UNESCO World Heritage site and one that should be on anyone’s Turkmenistan travel list.

4. The glorious gold-and-marble kitsch of Ashgabat

Turkmenistan’s capital was reduced to rubble in a major 1948 earthquake, but it has since risen from the ashes. Holding the record for the largest amount of marble in a city, Ashgabat is a bizarrely pristine city like nothing you’ve ever seen before.

Whilst in Ashgabat, make sure to check out the Giant Ruhnama – a massive copy of the book written by former dictator Saparmurat Niyazov. In it he offers spiritual guidance to the Turkmen people (and also bolsters his personality cult). If you’ve ever wanted to see a really, really big statue of a book, Ashgabat is your town.

Central Asia is almost as renowned for its carpets as Iran (the Iranian Achaemenid Empire actually used to rule here), and it’s worth dropping into the Carpet Museum in Ashgabat. Rightfully proud of their carpet-weaving skills, the Turkmens even have a carpet design on their flag!

There are, beyond the giant books, a number of other interesting monuments worth seeing in Ashgabat. Stop by the Arch of Neutrality (Turkmenistan is very proud of its official neutrality) and the extravagant Monument to Independence, surrounded by pristine parks and fountains.

Naturally, pretty much every tour to the country goes to Ashgabat.

5. Visit the desert ruins of Merv (and the nearby city of Mary)

Merv was once a thriving Silk Road city and by the 12th century was one of the world’s largest cities. All that came to an end when the Mongols invaded. The Mongol army (under the direction of Tolui, son of Genghis) massacred every man, woman and child in the city.

Although the city rebuilt, it never returned to its pre-Mongol levels of prosperity, and by the late 19th century it was abandoned entirely.

After exploring the ruins of this ancient city, you can see the world’s biggest yurt at Mary!

Escape the heat and dust of Turkmenistan’s desert-scape with a dip in this underground lake. Located in Bakharden Cave, the sulphurous waters of Kow Ata will refresh and rejuvenate you in preparation for your next adventure!

7. See one of the world’s most interesting graveyards

In the village of Nokhur is a unique cemetery – one where every grave is adorned with the horns of a mountain goat. Believed to protect the dead from evil spirits as their souls journey onto the underworld, the graveyard makes for spectacular (and eerie) photos.

8. Visit the Door to Hell

Perhaps Turkmenistan’s most famous site, the Door to Hell (or, as it’s officially known – the Darvaza gas crater) have been burning for some 40-odd years. Created when a Soviet drilling rig accidentally bored into a pocket of natural gas and then collapsed into the crater, the enormous hole still burns today and makes for a spectacular sight in the middle of the Karakum Desert.

Here we’ve only scratched the surface of this bizarre and endlessly interesting Central Asian country! There are 101 other things to do in Turkmenistan. Why not explore it yourself on one of our many tours to the country? 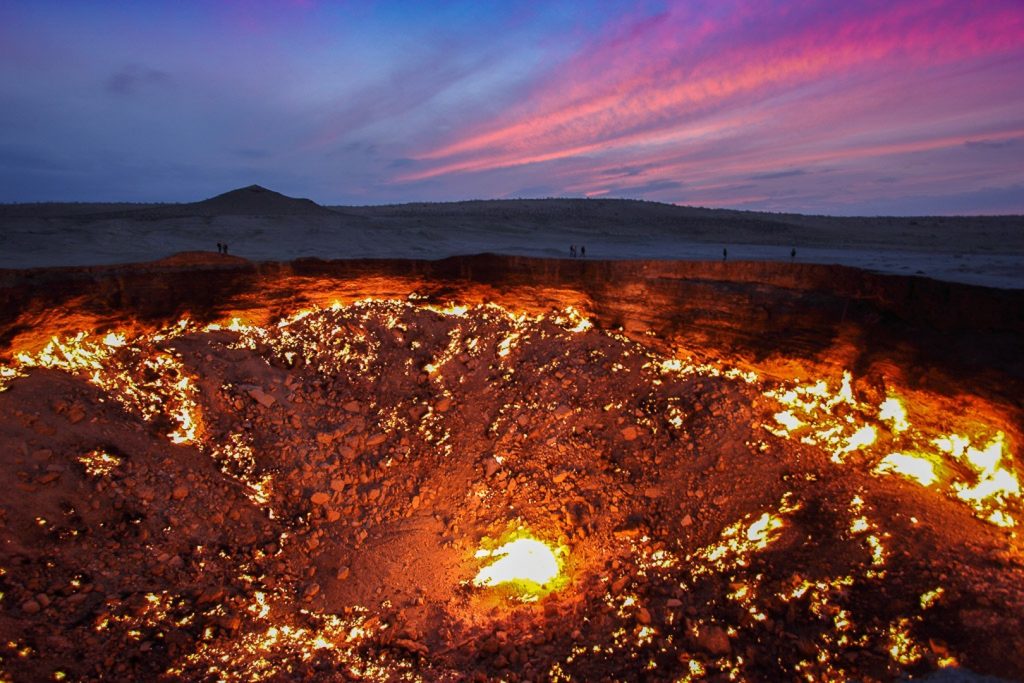 Can I travel to Turkmenistan?

The Door To Hell