The Pyongyang Marathon is now in its 6th year as an international event. It’s truly the best way to see the North Korean capital. Picture yourself running free through the streets of Pyongyang, at your own pace and without the watchful eye of your guides.

What exactly do I see?

The race starts and finishes in the Iconic Kim Il Sung Stadium. Originally built in 1926, the 50,000 seater all purpose arena was renovated most recently in 2016.

As you exit and enter the stadium, the imposing Arch of Triumph is the first structure you will notice. Built to commemorate Korean resistance to Japan from 1925 to 1945 the Arch is the second largest of its kind in the world after one in Mexico City.

Next up on your right it’s the April 25th House of Culture which hosted the most recent congress of the Korean Workers Party in May 2016. 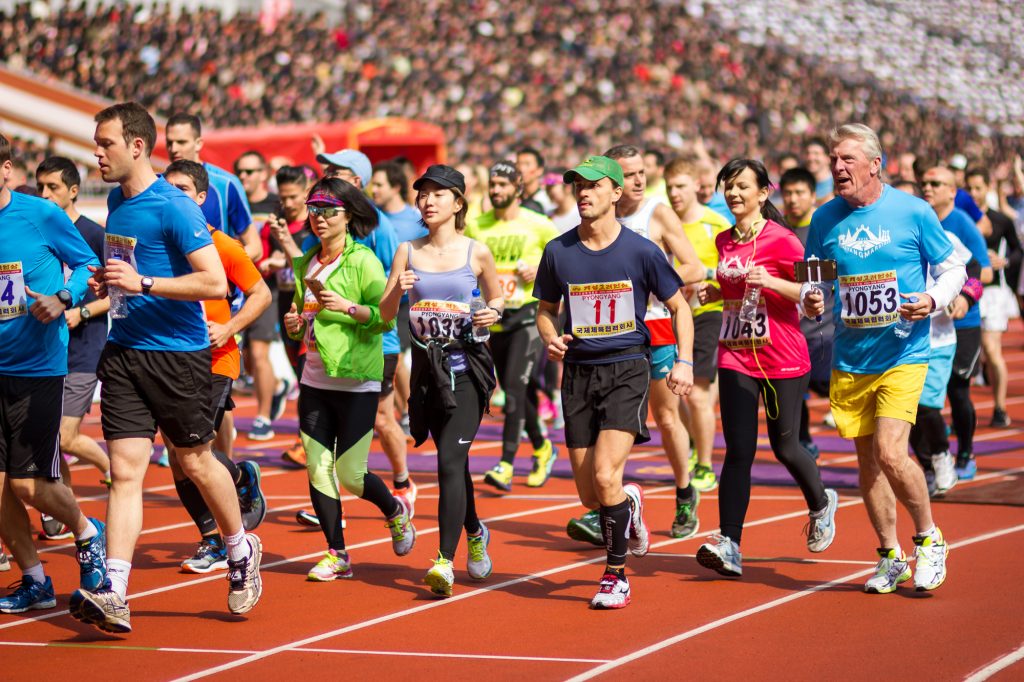 Then it’s downhill towards the infamous Ryugyong hotel. The pyramid skyscraper has been under construction since 1987 and remains unfinished.  These days it’s lit up every night in a massive illumination display.

Turning left and southbound before reaching the hotel you will pass the Victorious Fatherland Liberation War Museum and the captured US spy ship Pueblo. In 2013 the museum was upgraded significantly to bridge across the Potang river. It’s one of Pyongyang’s largest and most impressive landmarks.

Continuing on through the centre of the city you will run through the modern Changjon Street to the Taedong River and south again to Kim Il Sung Square and the Juche Tower. These are two of the city’s most iconic landmarks. The square is the geographic center of Pyongyang and was constructed in 1954 during the rapid reconstruction phase following the Korean War. It’s also culturally significant and hosts the majority of mass rallies and military parades.

On the other side of the river stands the world’s tallest stone tower. The Tower of the Juche Idea was opened in 1982 and named after the ideology of North Korean founder President Kim Il Sung.

This completes the 21km half marathon route through the North Korean capital. Surely the race of a lifetime and the most unique way to see this most unique city.

Join us this April for the Pyongyang Marathon Tour for an unforgettable and surreal experience.

Is There a Homestay in North Korea?

Visiting Kumsusan Palace of the Sun