What is the main Religion In North Korea?

Officially North Korea is an atheist state, however according to most recent estimates, some religions do exist. These are the Korean religions of Shamanism and Chondoism, as well as Christianity & Buddhism.

The North Korean constitution officially guarantees freedom of religion but in reality this is not the case. The DPRK was born out of Marxist Leninist principles so like Marx himself, the basics of North Korean socialism are strongly opposed to and incompatible with religious beliefs.

North Koreans are commonly tought from an early age about the dangers & negative effects of religion, but some continue to practice their religion underground regardless of the dangers involved.

Korean shamanism has been the ethnic religion of Koreans for centuries. After the division of Korea, most shaman priests migrated to South Korea and little is known how many practice the religion in the North today. Shamanism relies heavily on the human connection with spirits. We know from defector reports that fortune tellers continue to be quite popular in North Korea today. Many people rely on fortune tellers to guide them in life decisions such as marriage, moving house, jobs etc.

The government periodically release propaganda campaigns to discourage people visiting fortune tellers, however rumour has it that Kim Jong Il himself would seek the advice of a fortune teller to tell him how to schedule his on the spot guidance.

Somewhat embraced by the North Korean government over the years, Chondoism is seen as the national religion of Korea. It even has political representation in Pyongyang in the form of the Chondoist Chongu Party.

Literally meaning “religion of the Heavenly Way”, Chondoism traces its roots back to the 19th century and Confucianism. It places an emphasis on personal cultivation and as one improves one’s innate nature, one comes closer to heaven.

After the division of Korea, the majority of believers settled north and it is estimated that there are about 2 million Chondoists remaining in North Korea today.

Buddhism has been present on the Korean peninsula since the 4th century, however it never really gained a foothold. Today there are only about 50 Buddhist temples in North Korea. The vast majority are historical relics and not used for active worship.

The government has actively sought to discourage Buddhist practices and only about 10,000 believers remain. A recent revival however, seems to be taking place. A clergy training facility was opened which provides 3 years Buddhism learning courses. Several temples are also open for tourists to visit. The Pohyon Temple in the Mount Myohyang area is perhaps the finest preserved temple in the northern Korea. It dates from the 11th century.

Christianity landed in Northern Korea from the late 18th Century with the arrival of catholic missionaries. Protestants came later and between them, large numbers of Koreans were converted. By the early 20th century, Pyongyang had become an important Christian center, even being referred to as “the Jerusalem of the East”.

Kim Il Sung himself came from a strong Christian background. His mother was a Presbyterian deaconess.

After the founding of the DPRK in 1948, the government began to crackdown on Christians due to their perceived ties to America & the west. Thousands are estimated to have disappeared and driven underground.

Today there are only 4 churches left, all in Pyongyang. Nothing is known of the people who practice and attend services at these churches or if they are genuine or not. Many of the churches were built in the last 30 years are seen in some circles as an attempt to showcase religious freedom.

The DPRK began to introduce its very own Juche Ideology from the 1960s. It broadly states that man is the master of his own destiny and that self reliance is key. It also states that humans should break free of any dependency on spiritual ideas and realise that, working together, they can achieve all their goals without supernatural assistance.

Moreover, due to the presence of a sacred leader, the North Korean system has been likened to a religious cult on many levels. Eternal President Kim Il Sung and his successors of the same bloodline have been portrayed as divine beings. The North Korean calendar even begins in 1912. The birth year of Kim Il Sung.

The topic of religion in North Korea is clearly a complicated one. Religion does exist and religious freedom is enshrined in the constitution. The reality on the ground however, is very different.

Learn more about the DPRK on one of our scheduled North Korea Tours. Contact us if you want to organise a visit to a church or religious centre on a private tour. 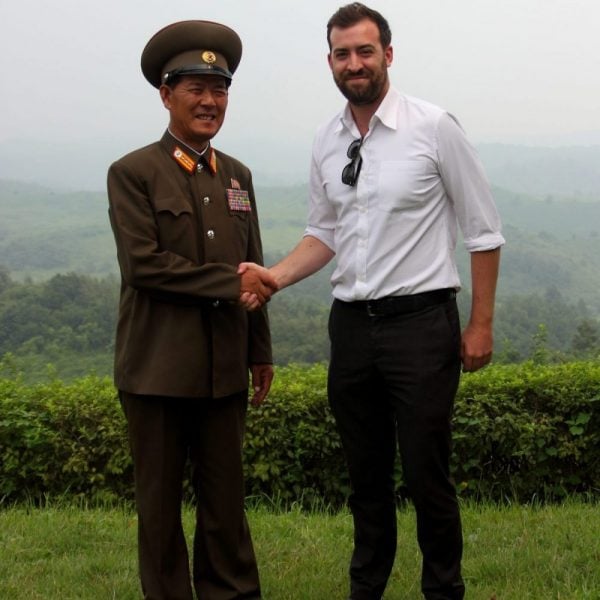 Visiting Kumsusan Palace of the Sun

What is a North Korean Mass Dance?