The Story of Pyongyang

Pyongyang is central to the North Korean system. The country’s largest and more important city is deemed the heart of the Korean people and its revolution. The city is treated very differently to everywhere else in North Korea. Why is this the case? Let’s take a closer look at the history of Pyongyang, North Korea.

Korean mythology traces the city’s foundation back to 1122 BC making it one of the oldest settlements in Korea. It would go onto become the capital of the ancient Korean kingdom of Goguryeo in 427 AD.

The name “Pyongyang” comes from this period. It means “flat” or “peaceful” land.

The latter part of the millennium saw the city invaded several times by Japanese & Chinese occupiers. This came to a head in 1890 during the first Sino-Japanese war. The “Battle of  Pyongyang” destroyed much of the ancient city but it was re-built in colonial style under the Japanese occupation of Korea from 1910 – 1945.

Following liberation in 1945, the city became the capital of the provisional Peoples’ committee for North Korea & later the Democratic People’s Republic of Korea (DPRK) in 1948.

Pyongyang was again completely destroyed in the Korean War (1950 – 53) and rebuilt in Stalinist style with aid from the Soviet Union. This gave it the distinct grand boulevards and extensive public space not seen in other East Asian cities. It was established as the central administrative region of North Korea and a directly-administered city so that it could grow freely into a center of politics, culture & economy.

Known as “the city in a park”, It would go on to become the showcase centerpiece of the New North Korean state to the outside world. 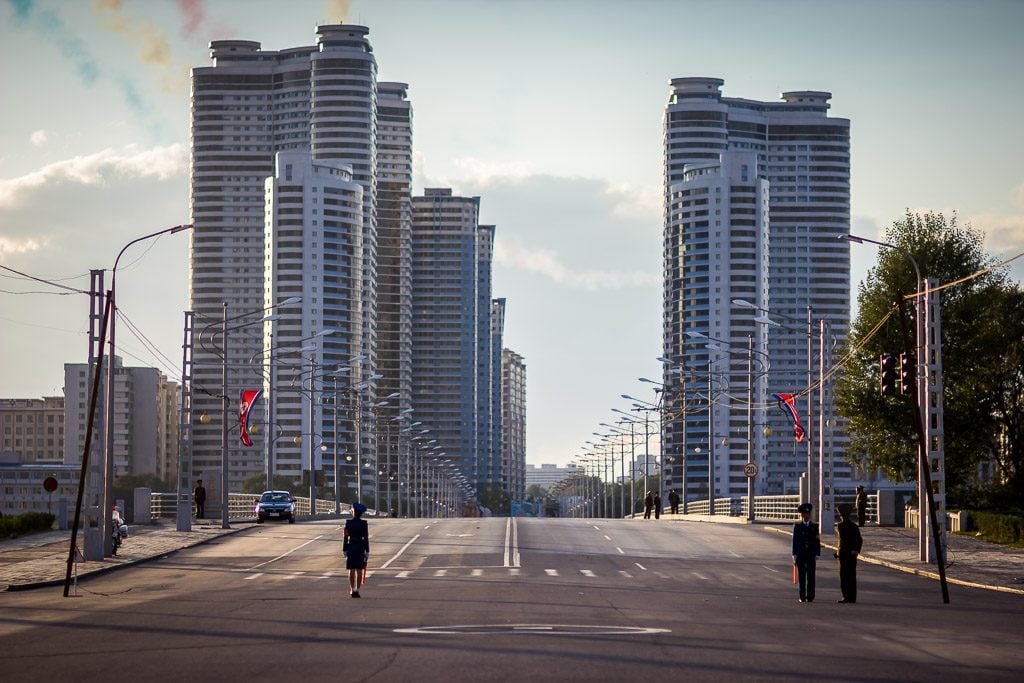 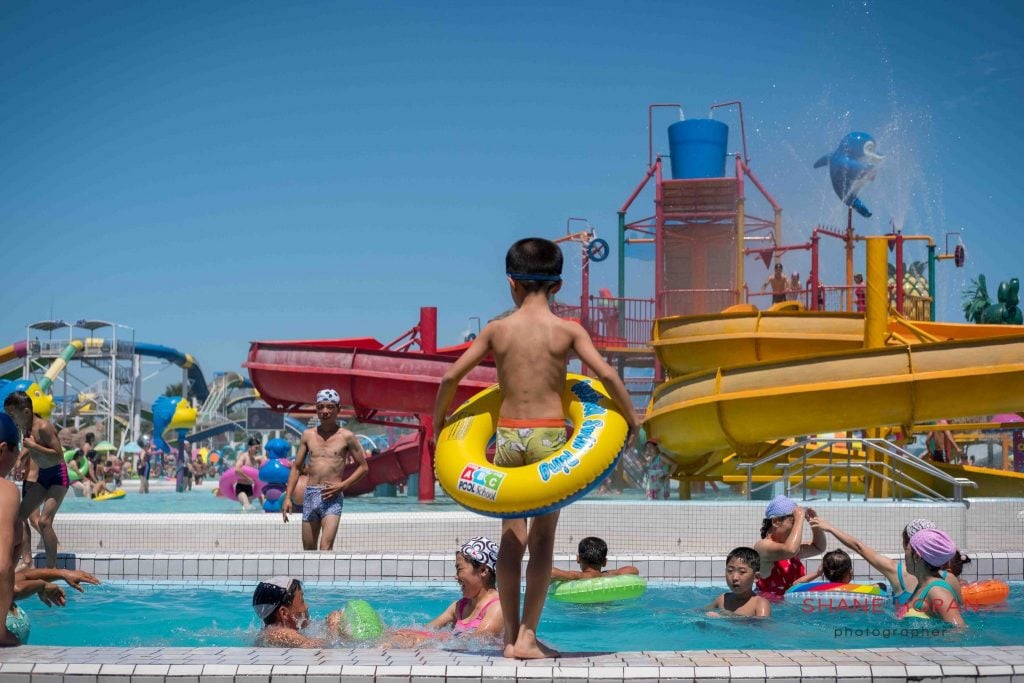 Pyongyang is a special city enshrined by North Korean law.

The Pyongyang City Management Law states that the central government shall invest materials and funds into Pyongyang first. This basically means Pyongyang and it’s citizens receive the best goods and resources first, ahead of everywhere else.

Every Pyongyang resident receives a special citizen card meaning they can travel freely to neighboring provinces. It also serves as a reminder that living in the capital is a significant privilege. Pyongyang is the most loyal city in North Korea due to these privileges and the fact that all residents have flawless family backgrounds tied to the state.

Residents in other provinces must seek permission to enter Pyongyang which can prove very difficult.

Pyongyang is currently undergoing a construction boom. The “Future Scientist Street” was completed in 2015 and Ryomyong street complete with its 70-story luxury apartment building was completed in 2017. Other massive refurbishment projects are taking place on some of the cities most iconic structures. It all highlights the ongoing investment into the image of Pyongyang by the North Korean leadership.

There are new leisure activities including ice rinks, a bowling alley, a water park, a delphinarium, a horse riding club as well as the refurbished Pyongyang Zoo.

Since the collapse of North Korea’s public distribution system in the 1990s, citizens have had to learn to fend for themselves which in turn has created an enormous wealth gap – especially in Pyongyang. Most North Koreans delve into some form of illicit trade to make extra cash and the government increasingly turns a blind eye. Markets are booming and everyone wants a slice of the pie. This inevitably means that many will be left behind as the gap increases and prices go higher. 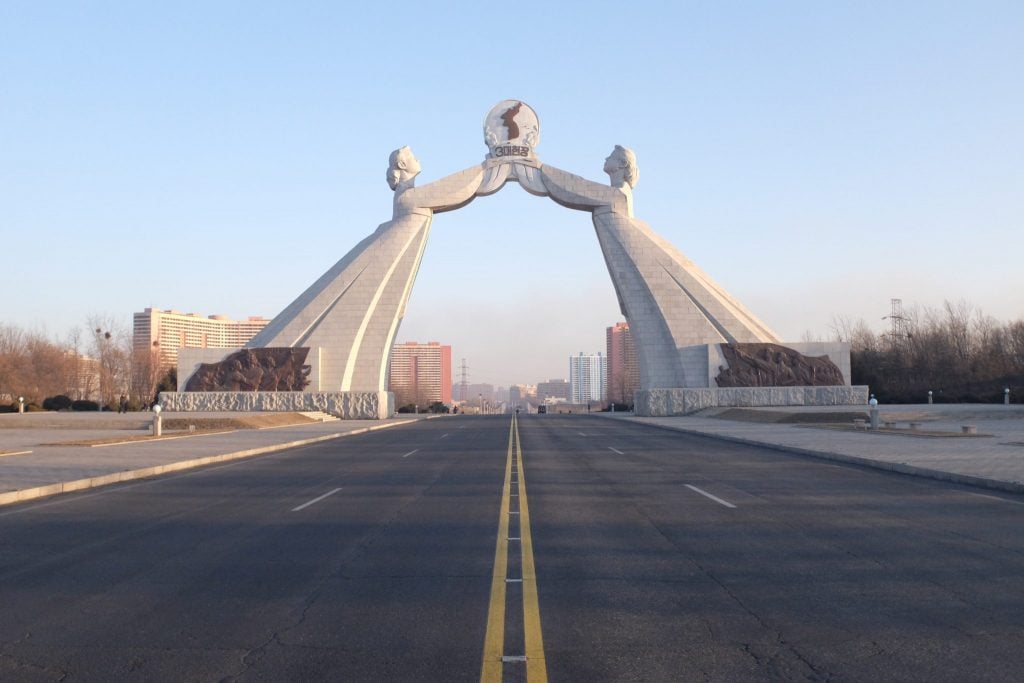 Given the level of investiment the city has received over the years, the government are quite happy to show it off to foreign tourists.

A typical Pyongyang tour will take in the Mansudae Grand Monuments, Kim Il Sung Square, The Juche Tower, The Party Foundation Monument, the War Museum and much much more.

Beyond the monuments, the city also has a vast amount to offer the curious visitor. Modern cafes and restaurants specializing in local and international fare have popped up around the city.

Visitors can visit bars, parks, watermarks and other leisure centers to mingle with local North Koreans. Any Rocky Road Travel tour to North Korea will focus on visiting these “normal” places to experience a different side to life in Pyongyang, away from the propaganda heavy museums and monuments.

It’s difficult to quantify the importance of this city.

Pyongyang is central to the North Korean way of life and is the image the government portrays to the world and it’s own people to legitimize its power.

The grandeur & splendor of it’s architecture and skyline has to be seen to be believed. See it for yourself on any of our North Korea tours!

The Biggest Holidays in North Korea

Why You Should Tour North Korea