North Korea’s flag carrier Air Koryo was for years listed by Skytrax as the world’s only 1 star airline. It’s no longer even rated but was a 1 star rating ever deserved in the first place? We’ve all had our in flight nightmares, but how does a trip with Air Koryo compare to the worst of them?

If you consider customer ratings for example, Air Koryo has a respectable level of 6 out of 10 rating. When compared with other airlines, Ryanair receives 5 out of 10 and Korean Air receives 8.

One starts to think that the 1 star rating was maybe political above anything else, but let’s take a closer look.

Air Koryo was formed as Chosŏn Minhang in September 1955. Domestic routes to Hamhung and Chongjin began as well as international routes to Moscow & Khabarovsk in Russia and Beijing in  China.

By the late 1980s Choson Minhang – Korean Airways were flying to Beijing twice a week with Tupolov Tu-154s, weekly to Khabarovsk operating with a Tu-134, once to Sofia & Prague via Moscow, Irkutsk, and Novosibirsk with a Tu-154, and once to East Berlin via Moscow with an Il-62 aircraft. These were the glory days of the airline.

During these times and even up to today, Air Koryo has a very good safety record despite the reputation. The only fatal accident came in 1983 when an Ilyushin-62 crashed in Guinea during a non scheduled service. 23 people were killed.

With the collapse of the Soviet Union and the Eastern block in Europe, international routes were vastly reduced in the early 1990s. The airline then went through subsequent changes by renaming itself Air Koryo and modernising the fleet in the 2000s by adding the Tupolov Tu- 204.

This in theory gave the airline the necessary safety permits to fly into EU airspace but by this time regular flights outside of East Asia were not economically sustainable.

Inconsistent & mostly charter flights to Bangkok, Kuwait, Singapore and Kuala Lumpur followed in later years. These days, the only scheduled international flights are to Beijing, Shanghai, Shenyang & Vladivostok. Beijing is serviced 6 days per week with the others twice weekly.

The check in experience differs substantially if you’re flying from Chinese airports or Pyongyang airport. Let’s take Beijing for this example.

Check in is done from Terminal 2 at Beijing Capital Airport. As Air Koryo is not on any international booking system (due to sanctions) check in is a manual and slower process. Koreans that are flying home usually take a huge amount of luggage along for the ride. Capital airport has strict luggage screening and carry on rules so this can add to the already time consuming process.

Flying back however, is a breeze. There’s rarely two flights checking in or departing at the same time in Pyongyang so you’ll have the whole departure lounge to yourself. A perfect chance to check out the shiny Pyongyang airport duty free shops or browse some of the only WiFi in the country. 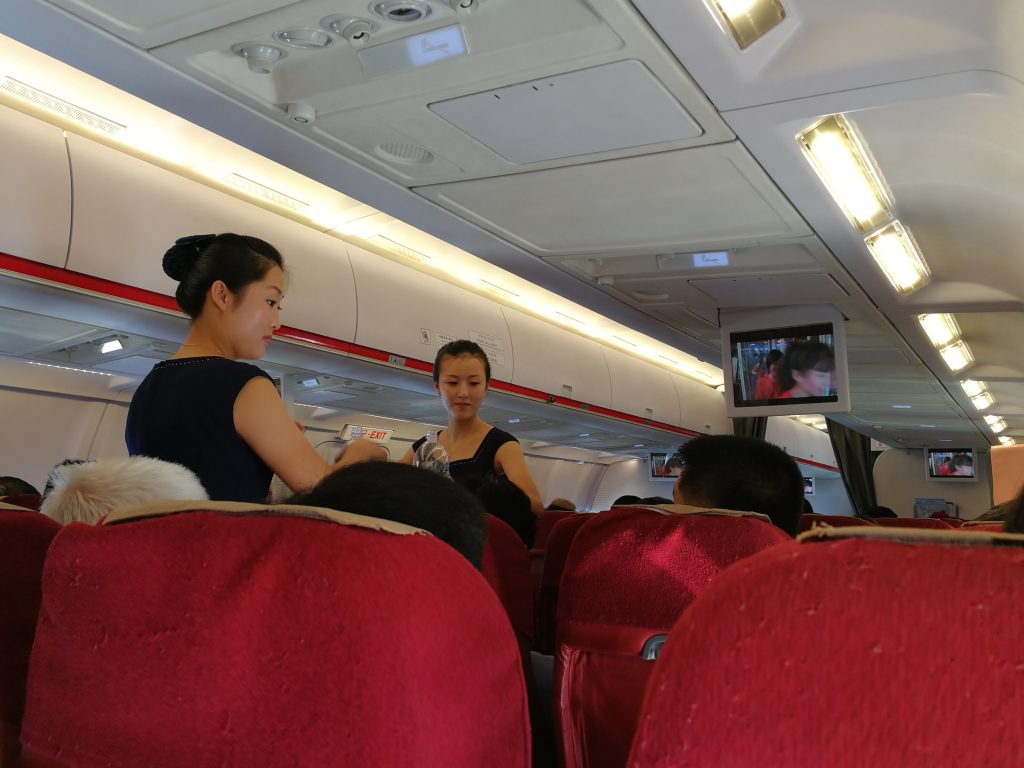 Complimentary North Korean magazines and copies of the Pyongyang Times await you at the door. These make for great souvenirs so pack a few in your bag but remember not to fold any page that contains an image of the leader!

The seats are comfortable enough and the legroom more than acceptable for a short haul flight.

In-flight entertainment consists of a flip down TV screen overhead playing endless renditions of the Moranbong Band’s greatest hits. Not the best but it all adds to the experience and is a wonderful reminder of where you’re heading to.

Opinions on the burger vary widely but we love it and usually opt for seconds. Don’t ask us what the meat is though, we don’t want to know.

On the drinks menu there’s a choice of Air Koryo’s own juice brand or one of North Korea’s finest beers. Sick back and enjoy the scenery as you swoop low in over the paddy fields north of Pyongyang.

It’s not an easy task to rate Air Koryo given the lack of regular services or a frequent flier program. We have our own opinions on Air Koryo but we’ll let you come up with your own judging on the photos and video provided.

Or you’ll just have to see for yourself on one of our North Korea Tours!

As one of the official Air Koryo booking agents, Rocky Road Travel can organise your trip to North Korea from start to finish. Contact us for more information on travelling to North Korea with Air Koryo today!

Is There a Homestay in North Korea?

The Giant Leap – Booking a trip to North Korea