Nestled in the flood plains between the Tigris and Euphrates rivers, the Mesopotamian (literally meaning “land between two rivers”) Marshes of Iraq are the largest wetlands in the Middle East. They not only provide a habitat to hundreds of bird and fish species, but they are also home to thousands of Marsh Arabs who are returning more and more to their historical heartland.

Many historians are of the belief that these marshlands were once the biblical Garden of Eden. What we do know for sure is that the area cradled some of the earliest civilizations and the first written languages.

With swaying reeds, water buffalo, and rare waterfowl, this magical corner of the earth has also witnessed centuries of human turmoil and religious strife. The biggest impact on the marshes of Iraq however has been from Saddam Hussein’s Ba’athist regime. Draining of The Marshes

From the 1950s to the 1990s, the marshes lost a colossal 90% of its total area. It was a decline described by the United Nations as a “tragic human and environmental catastrophe”, on par with the deforestation of the Amazon rainforest.

The draining of the three main marshes, the Hawizeh, Central, and Hammar marshes were mainly due to political reasons. The biggest damage was done after the 1991 uprising against Saddam Hussein. The Marsh Arabs (Ma’dan people) were punished for their supposed role in the uprising. Over 200,000 were forced off the marshes due to water diversion tactics.

Several canals were built by the regime to strategically divert the flow of both the Tigris and Euphrates around the marshes and directly into the Persian Gulf. Saddam had the canals called Saddam River, Glory Canal, and Loyalty to the Leader Channel, among other similarly self-congratulatory titles. 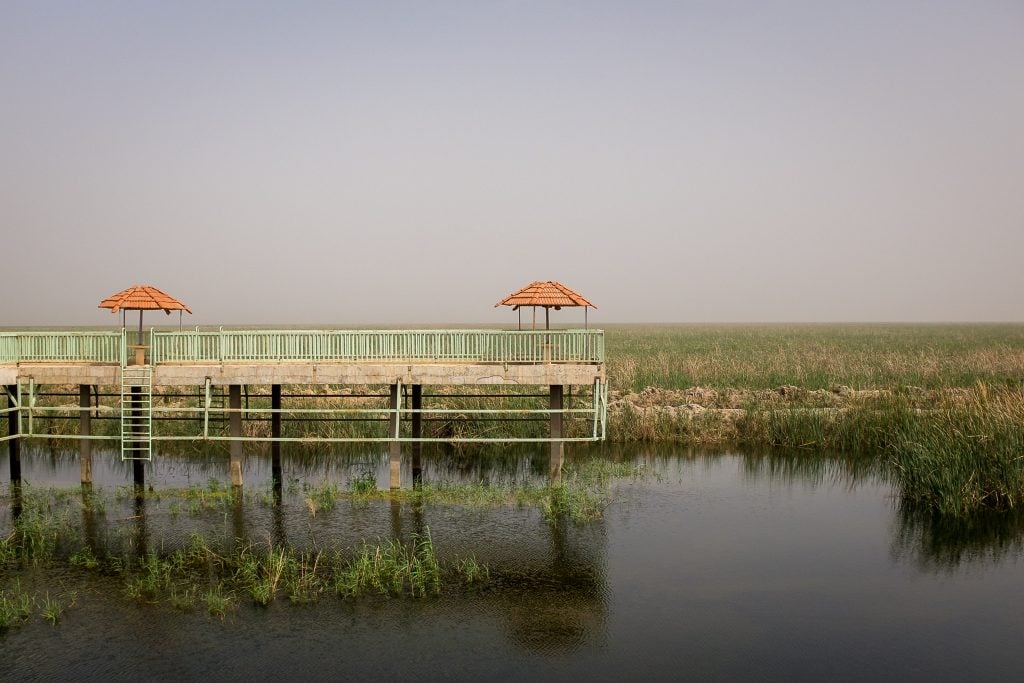 This water diversion plan, which was accompanied by a series of propaganda articles by the dictator directed against the Mash Arabs,  converted the wetlands into a desert. This forced the residents out of their settlements which they had lived on for millennia.

The western Hammar Marshes and the Central Marshes became completely desiccated, while the eastern Hawizeh Marshes were dramatically reduced. Furthermore, villages were burned down, water was deliberately poisoned, and vehicles were attacked by government helicopters. Several thousand Marsh Arabs were killed.

The majority were displaced to areas adjacent to the drained marshes. They were forced to take up conventional agriculture, or to life in camps in other parts of Iraq. An estimated 80,000 to 130,000 fled over the border to Iran.

The Marsh Arabs, who at their height numbered about half a million, have now dwindled to as few as 20,000 in Iraq. Only 1,600 of them were estimated to still be living in traditional villages by 2003. Following the 2003 invasion of Iraq, a team of local & global experts worked with marsh dwellers to break down Saddam’s systems of dykes and canals. Many more embankments and drainage works were dismantled under the newly formed administration, and the marshes gradually began to refill.

How much has recovered?

It’s difficult to say with seasonal variations but most estimates had by 2008 seen 75% of the marshes fully restored, including most of the Central Marshes.

However, since then the marshes have shrank again below 50% as a result of Turkish and Iranian damming of the Tigris and Euphrates Rivers. Unfortunately these will prove much harder to reverse than Saddam Hussein’s dykes and canals.

The volume of both rivers has decreased by 60% as a result. Despite gaining UNESCO world heritage protection in 2016, the Mesopotamian Marshes of Iraq and the people who inhabit it still face a huge fight to survive. Visit the marshes of Iraq before they disappear!

The marshes are easily accessible from the southern cities of Nasariyah and Basra. Take a boat trip through the waterways and stay overnight in a homestay with a local family. All the while learning about the Marsh Arab culture and way of life. There’s no better travel experience in Iraq.

Get in touch for more information on travelling to Iraq and check out our Iraq tour schedule.

Iraq Tours From The UK